Welland salutes its best in arts and culture 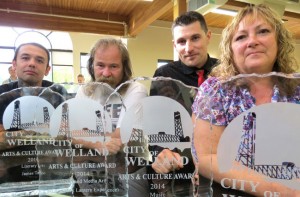 Welland’s Arts and Culture Awards winners for 2014 are, from left: James Takeo for literary arts; The Black Lantern Experience (BLX) for visual and media arts, represented by T. Lee Kindy; and for music both Cory Cruise and band This Time Around, represented by Sue Robins. (GREG FURMINGER/Tribune Staff)

The edgy arts group that has taken Welland by storm is being credited with bringing new life to the Rose City arts scene.

BLX, which has remained in the media spotlight since forming in June 2013,was recognized for hosting more than a dozen art shows, multiple poetry readings and its month-long storefront art gallery project this summer on Hellems Ave. — TheHardWay.

The outspoken advocate for the arts in the city was recognized for his prize-winning poetry and his blogging. He is also the arts opinion columnist for The Tribune.

Two awards were presented for music: to Cory Cruise and This Time Around.

Cruise, who has been showcased at IlluminAqua and Niagara Food Festival, is a recent Niagara’s Next Star winner and has established his name in the local music scene. He was the people’s choice award winner at last year’s Niagara Music Awards.