Showing support for the troops on Pachino Day 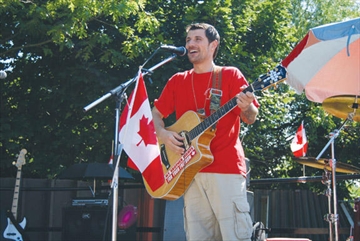 Canada Day may have been at the beginning of the month, but patriotism in Niagara Falls didn’t stop there.

On Saturday afternoon, flags were flying and spirits were running high at the “Support the Troops” rally at the Royal Canadian Legion Branch 51 on Fraser Street.

The event kicked off at 1 p.m. and featured live entertainment in the form of local rockers Black Creek and Cory Cruise, whose brother Jesse Obee serves with the Canadian Forces. There was plenty of food and, of course, lots of Canadian flags.

Mike Blais, event organizer, said it’s important for Canadians to show their support for the troops.

“I’m worried that people are getting a little complacent in supporting the troops,” he said. “It’s important to let them know that we’re thinking about them and support them.”

Attendees at the rally were able to show that support by signing the “Travelling Flag” – a Canadian flag that has been across the country, and back again. People show their support by signing on the red portion of the flag, while on the white portion are the names of the 150 Canadian Forces members who have been killed while serving in Afghanistan and the four civilian casualties, which include a journalist and diplomat.

Sue Obee from St. Catharines signed the flag twice, once with her own name and the second time with the name of her son, Jesse, who has served in Afghanistan and is currently  at the Canadian Forces Base Petawawa.

“He really wanted to be here, but it just wasn’t possible because he’s on course right now,” she said. Her eldest son, Cory Cruise, also signed the flag and performed at the event.

Blais said the flag will be making its way across the country, collecting signatures, before heading to Afghanistan in November with a member of the Royal Canadian Regiment. Eventually, he said, it will be on display in the war museum once the troops return home.

“Lots of people came today just to the sign the flag,” he said. “They apologized for not being able to stay but they said they really wanted to sign the flag.”

Speaking to the crowd on Saturday afternoon, Blais said that while Canada will have been at war in Afghanistan for almost 10 years by the time of the scheduled end of the Canadian mission next year, the nation’s collective resolve has been tested.

“Tragically, the Niagara region has not been spared of the heartbreaking grief, and five exceedingly courageous soldiers have been slain,” he said. “As a community, we have shared profound sadness and demonstrated great empathy for the loved ones of those the valiant have left behind.”

For those who weren’t able to attend the event but are looking for a way to show their support at home, Blais said the best way is to wear red on Fridays.

“It’s so simple and maybe even seems a little insignificant, but it really does matter,” he said. “You would not believe the amount of people, strangers, who have come up to me and thanked me for wearing red.

Families of people serving overseas, soldiers who have returned home, and families who have lost someone in combat – they’ll come up and thank me or give me a hug. It matters to them.”

The rally was tied into Branch 51’s annual Battle of Pachino Day event where members gather and eat a bowl of “lousy” spaghetti and drink a glass of wine.

“It’s just what they did then,” he said.

The Battle of Pachino took place on July 10, 1943, and marked the invasion of Sicily.