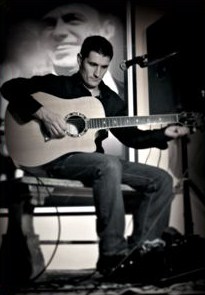 Music lovers will have the chance to check out Niagara talent in an intimate setting thanks to a new acoustic series launched Sunday in Niagara Falls.

Clarke and Lisa Bitter, co-owners of Batter Up! Olde Style Fish and Chips, decided to keep their Main Street restaurant opened late on Sundays and bring in Niagara musicians to occupy their couch for the new acoustic music series. Their motivation, they explained, was two-fold: it’s both an effort to bring a new crowd into the area and an opportunity to showcase some local talent.

“Sunday’s always been a casual night,” Clarke explained. “There’s a need for a nice intimate venue here in town and we thought our space was perfect. There’s a phenomenal amount of talent in the area and this series will definitely highlight that.”

Lisa noted that unlike some other parts of the city that are undergoing much-publicized revitalizations, the rebirth of Main Street has flown under the radar for the most part. She’s hoping this series will be an opportunity for people to come and reacquaint themselves with the area.

“There’s been a lot of changes and I think people will be surprised by what they see,” she said, adding that in the year they’ve been in business they’ve enjoyed hearing the positive feedback from customers.

As self-described music lovers, the couple said their own desire to hear good music also served as part of the inspiration for the series. A recent event held as part of the Niagara Night of Art series saw their friend, musician Cory Cruise, perform on the restaurant’s couch. Other musicians performed on the sidewalk out front with some passersby joining in for an impromptu jam session.

“The response was great,” said Lisa.

Niagara Falls musician Aaron Berger kicked off the series on Sunday night, taking up residence on the couch accompanied by Matthew James on percussion. Berger, an established solo musician named male vocalist of the year at the 2012 Niagara Music Awards, also performs with the Perpetual Peace Project. The group recently returned from a cross-country tour with Xaviar Rudd. Clarke said the series features several members of the Perpetual Peace Project. Most of the musicians featured in the series were once regular fixtures in the Niagara Falls’ Queen Street music scene. Clarke and Lisa themselves used to be involved in the music scene on Queen Street, working with Artist Link, organizing performances at the now defunct Q Club.

Clarke said once the series reaches the four-week mark he’ll assess the turnout and decide whether or not the event needs tweaking. If there’s a good response, he said he’d love to continue the series and offer more Niagara artists the opportunity to showcase their talents. Each series, he said, would likely have some sort of theme tying the artists together.

The nights of music kick off at 7 p.m. and run through 11 p.m. While the restaurant typically closes at 7 p.m. on Sundays, things will remain open for the series and the Sunday special of  tempura- or beer-battered salmon and a caesar for $9 remains in place. The kitchen closes at 9 p.m., but Clarke said there will still be some items available throughout the evening.